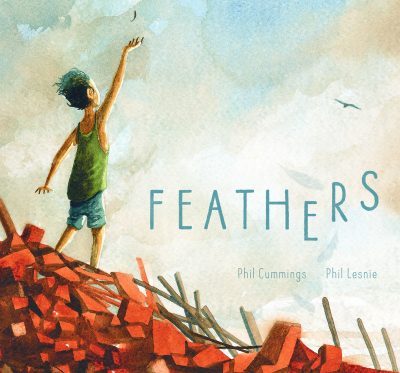 Feathers is a beautiful picture book written by Phil Cummings and illustrated by Phil Lesnie. The reader follows the flight of a sandpiper as it migrates to safety. As it flies we are given a glimpse into the lives of people fleeing their homes due to extreme hardships. The story ‘conveys the despair of displaced people and the cruel effects of natural and man-made disasters‘ (booksanpublishing.com).

Phil Cummings said he based the three feathers on devastated countries that the East Asian-Australasian Flyway passes over: China, which had an earthquake in August 2014; Myanmar, which has had a history of civil unrest; and Cambodia, a country which is often shaken by floods and droughts. Mark out these countries on a map, and see how they match up with the Flyway path”.

There are many reasons why people move between countries. Click on the ‘getconnected’ cover below to read the magazine and discover more about immigration. The magazine was published in 2010 so the figures will be out-of-date but there is some really interesting information, including a great timeline of immigration.

Write a newspaper report, highlighting an event that has occurred in one of the three countries mentioned in Feathers (China, Myanmar or Cambodia). Use the Scholastic Writing Tips for News Stories as a guide. https://www.scholastic.com/teachers/articles/teaching-content/writing-tips-news-stories/

Become a news reporter. Rewrite your newspaper report as a script . Use your camera app to record a video of yourself reading your script aloud. Next, use the video editor feature within the Photos app to create and publish your news report. Dress up for your role as ‘news reporter’. Think about your background as you film, add 3D effects (within the video editor tool) such as Breaking News to make it look professional.

Make your own birds…